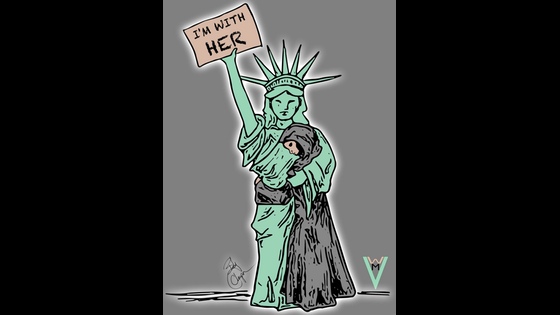 Wear My Values is a Social Justice Apparel Company; our focus is to create wearable images which promote the America, and the world, in which we want to live.

Latest Updates from Our Project:

This is what an ALLY looks like is a new design inspired by the #ILookLikeAnEngineer campaign from a few years back. There are more and more people engaged and interested in defending the rights and protections of the more vulnerable members of their communities, but they don't know how to show that they're allies. These are Allies: people who are privileged enough to be safe from the discrimination, but who stand up and take action to show that the discrimination is wrong.

The shirt's text reads: "This is what an ALLY looks like. Allies may look different than you expect. #Look Deeper #WearMyValues #ImAnAlly."

We're proud to release a design that allows every ally to show who they are and want to be.

A portion of the profits from This is what an ALLY looks like will benefit anti-bullying organizations. We have selected an organization, but out of respect for them, we are awaiting their consent to share their name.

This shirt is offered in white, red, orange, yellow, green, blue, and purple. We're offering white specifically to give the opportunity to tie-dye it in whatever colors may best represent your organization or your cause! #AllyLooksLike

Liberty for All features a Warhol-esque print of Lady Liberty wearing clothing characteristic of a variety of social, religious, and ethnic groups. Wear My Values believes that the rights, protections, and privileges of all people should be applied and defended equally. Whoever you are, whoever you love, whatever you believe, we believe in Liberty for All.

Liberty for All is the headlining design for our #LookDeeper campaign. Lady Liberty represents the best of American values: generosity, acceptance, and compassion. We encourage you to look for Liberty, wherever you are, in everyone you meet.

A portion of the profits from Liberty for All will benefit refugee relief organizations. We have selected an organization, but out of respect for them, we are awaiting their consent to share their name.

We are offering this shirt in sand, grey, orange, and garnet. #LibertyForAll

Today, I made a donation of $112 in the name of Wear My Values to the ACLU.  It's not as high as we'd hoped, but it's a good start towards what we want to be doing.  I've put the details of the final financials below, for those of you who are interested.

Our next Kickstarter (#LookDeeper) will kick Monday morning around 9am MST (I have to push the button manually, so it's not going to be exact...).  Join us in our campaign to create a 'stop and think moment' for the entire country!  I'll be rolling out a few more updates this weekend ramping up to the campaign launch. A special preview for you of one of our new designs:

Not Red, not Blue, AMERICAN speaks to the partisan divide in the United States today. With this shirt, we are issuing a challenge: Make a statement and say that you are not defined by your last vote or political affiliation. As Americans, we choose how to treat our friends and neighbors.

BACKERS will determine what organization or cause a portion of the profits from Not Red, Not Blue, American will go towards. There will be a post on Wear My Values' Facebook page starting Monday to submit your favorite charity to the list!

We plan to offer this shirt in charcoal grey, white, and purple! #NotRedNotBlue

The Kickstarter goal was $2002, and we had $2384 in pledges (thank you all so much!), exceeding our goal by $382.  After all the ordering, shipping, and final arrangements were made, the things that we listed in our Kickstarter budget ended up costing us $375 less than was pledged.  Which is awesome!

However, there were a variety of additional expenses that I didn't expect or know about as I was planning the Kickstarter budget...  which were not so small.

The additional $900 startup investment covered these costs, but they were not covered in the Kickstarter budget.  I am choosing to take these costs as lessons learned for Wear My Values and for myself, and donating 30% of the remaining funds from the Kickstarter to the ACLU.

I feel it is a good choice, and in line with both my values and the values of our company.  I am not, however, able to do this for campaigns in the future; they will have to be profitable for me to donate profits.

Thank you to those of you who made it this far into the update!  Looking forward to happier topics tomorrow, and kicking off on Monday morning.

Our new website is live today! There are a few pages still under construction, but tell us what you think! www.WearMyValues.com

Every package has been shipped, and according to my tracking information, has been delivered. We want to see pictures of you in your shirts, and want to hear about any issues or size problems you've had.

Our new Kickstarter is going live this weekend! We're excited and finally ready!

Check out the website, send us pictures of you in your shirts, and we'll let you know as soon as our next KS goes live!

I've heard a few folks have already gotten the packages that we sent out Friday afternoon, awesome!

Included in each package is a gift from Becky- a Liberty's with Her sticker!  Hope you enjoy it, and thanks Becky!

We'd love to see pictures of you in your shirts!  Email them to us at contactus@wearmyvalues.com

Can't wait to see you all in your shirts!